This week, Google released a new tool that allows Google My Business account holders to handle the removal of Google reviews, one by one, and see the status of these review removal requests.

This is big news in the fight against fake reviews on Google, and comes hot off the heels of a report that shows a marked decrease in trust in reviews over the last few years.

However, it’s not particularly suitable for agency accounts managing lots of listings. As Joy Hawkins, who first reported on this tool, points out:

This feature seems to only work for Google My Business accounts that have a small number of listings in them. I tried it in an account with 33 listings and it said “Based on the number of Business Profiles you manage, this process is not available”. Our agency account also had too many listings to qualify to use it.

While not perfect for everyone, this is still a step change in how Google treats review removal, and perhaps even indicates a renewed focus on review quality.

To show how it works in practice, let’s look at a real-world example of a typical situation in which you’d want reviews taken down, doing so using this new Google My Business review tool. Here’s a review of Google’s review takedown management tool…

(I’ll aim to update this post when there are updates about the reviews we’re removing, so keep an eye out for that!)

In sunny Brighton, UK, there’s a non-profit arts organization called Carousel. They’re based on Queen’s Road, near the train station and not far from the beach. On the nearby seafront sits a traditional fish and chip restaurant. It’s called ‘Carousel’s’ on its signage as well as its Facebook and Tripadvisor pages. However, rather confusingly, it’s named ‘OW Smith & Son’ in its Google My Business profile. 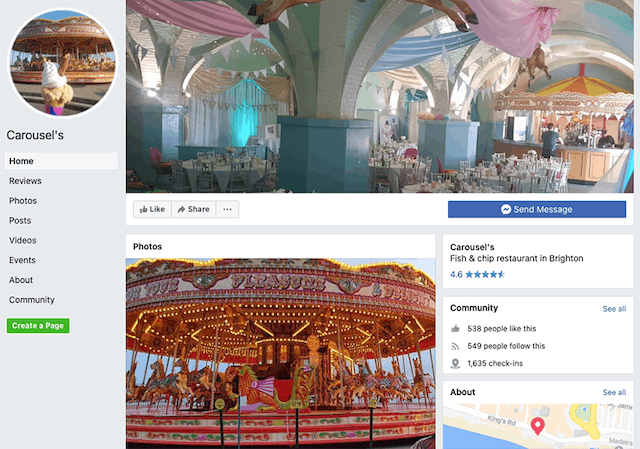 Most likely because of this mismatch of business names, any sun-seeking tourists looking to review their fish and chips at Carousel’s on Google will naturally land on the arts organization Carousel‘s GMB profile when searching ‘carousel’s brighton’ in Google search or Maps.

You’re probably ahead of me here, but suffice it to say, this has led to 5 of the 6 Google reviews of the arts organization mentioning their crispy cod and not-so-crispy fries, rather than their work in the learning disability arts community. 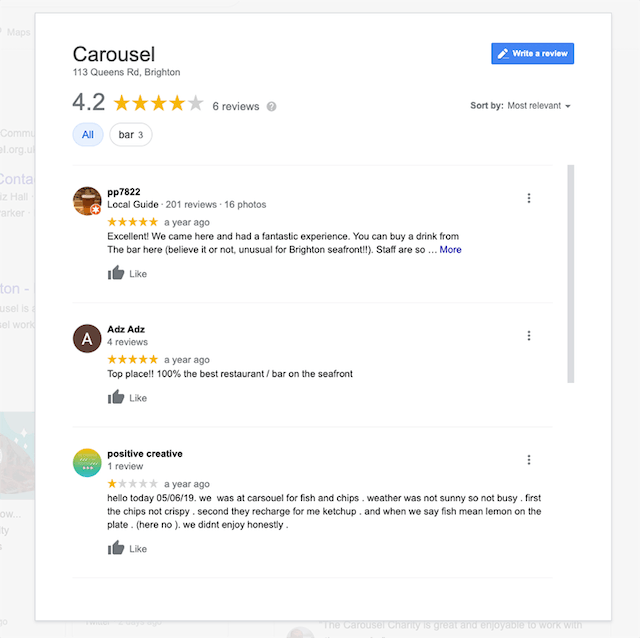 Most frustratingly for the team at Carousel (who have been kind enough to grant me access to their GMB profile for the purposes of this case study), these reviews not only bring their overall star rating down, but they are also appearing front and center in the Knowledge Panel, potentially causing all sorts of confusion for philanthropists looking to donate to the charity.

As we’ll see, Carousel has been fighting Google on these reviews for some time, to little avail. But with a dedicated review takedown and escalation tool at our fingertips, perhaps this time it’ll be different?

Let’s go through this new process and see what, if anything, can be done differently or better.

First, we log in to our Google My Business account and head over to the tool, which sits within Google Help. Make sure you bookmark the link as it’s not particularly easy to find! Select the business you’re looking to manage reviews for, and click ‘Continue’.

Here you can select whether to look at the status of current review reports and escalations or report a new review for takedown. Right now we’re looking to remove a review, so select this and click ‘Continue’.

Here you’ll see all reviews that aren’t currently being escalated for takedown. (Yes, you’re seeing right: only two of the six reviews for the arts organization aren’t already sitting in takedown limbo, but more on this shortly.)

The top review is clearly not about this business, so let’s click ‘Report a problem’. Here, we’re shown a short list of reasons you might need a review taken down. In this instance, ‘This review is not relevant to the place’ applies, so we’ll click that.

You’ll see this message and then receive an email letting you know that the review is being assessed.

We can now confirm that the review has been reported, leaving it in the hand of the Google Gods. With one review reported, let’s now look at how we can track its status using this tool.

How Does Status Tracking Work in Google My Business’s ‘Manage Your Reviews’ Tool?

Log in to your Google My Business account, then visit the ‘Manage your reviews’ tool in Google Help. 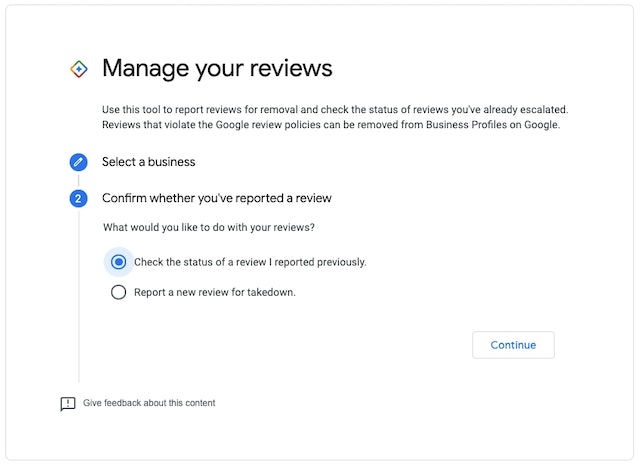 Here we see a list of reported reviews and some info on where in Google limbo they sit:

As you can see, most of these reviews are still in the ‘Decision pending’ phase, including the one we’ve just submitted.

Apart from the top one, all these reviews were reported on January 27th of this year (almost two months ago). In my opinion, that’s a very long time to make such a cut-and-dry decision, especially when this tool notes that “Reported reviews may take up to 72 hours to be evaluated”, but it also highlights why this kind of tool is necessary.

We can see that one of these reviews previously reported, for the same reason as every other one (“we’re not a restaurant!!!”), has come back as ‘Report reviewed – no policy violation’.

It’s worth noting that none of these reviews were actually ever reported for violating Google’s review policies, which include offensive or sexually explicit content. They were reported for being about a completely different business, which is strangely absent from these policies. It’s interesting that the reason given is ‘no policy violation’ when that was never in question.

We can appeal against decisions on reviews, but we can only do it one at a time. As I’ve noted, this tool doesn’t allow for the selection and management of multiple reviews so it’s not particularly well-suited for scale or for businesses with multiple locations.

If we select the review we want to appeal against, and click ‘continue’, we’re shown the following message about a ‘one-time escalation for a second assessment’.

The message only talks about policy violations, and doesn’t offer any option to highlight the review as ‘not about this business’. Clicking ‘submit an appeal’ just takes you to the very serious ‘Request Removal of Inappropriate Reviews’ form, which is completely irrelevant in this case. This process should work really well for those businesses having to deal with fake reviews that violate Google’s policies, streamlining the process and allowing for a single location to understand review takedown request status.

Sadly, though, it’s of no use to Carousel, which is still having to go down the frustrating route of manually requesting review removal via Google’s team, to no avail so far.

Epilogue: The Reviews That Returned from the Dead

In finishing up this process for the purposes of this case study, I realised there was a screenshot I hadn’t grabbed from within the tool.

I logged back in to take it and found that, lo and behold, all the earlier reviews that were in ‘Decision pending’ were now no longer in the review removal status page… 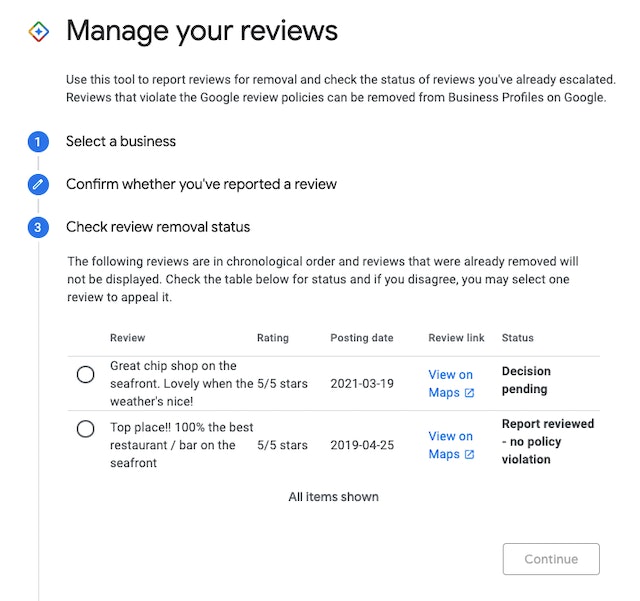 …and instead they’ve moved into the list of live reviews you can report for evaluation. Apparently, the decision had been made in the 10 minutes I was navigating the tool and collecting screenshots, but crucially none of these reviews entered the ‘Report reviewed – no policy violation’ phase, and no emails were sent to GMB account holders to advise that any decision had been made.

No, they just bounced right from ‘Decision pending’ to ‘Report a problem’, as if the reviews had never been reported in the first place. This is not a great experience for GMB users and makes it seem pretty unreliable.

And so the cycle begins again… I “report a problem” and tell Google these old reviews are still “not relevant to this place”. Let’s see what happens in 72 hours, shall we? 😉

Ultimately, in its current state this feels like a tool that’s been designed to allow Google to push back on claims it’s not doing enough to combat fake reviews rather than one that makes the removal process any better.

The functionality of seeing review report statuses is pretty neat, but I can’t help but feel it’s just there to reduce the number of support tickets following up removal requests, asking for updates. Instead of emailing a Google representative to find out no decision has been made on your reported review for 2 months, you can just use this tool to find out for yourself! 😭

I will admit that this tool makes the process of reporting reviews a little easier, but what I think the local SEO community would rather see an improvement in is the quality and speed of these requests from Google’s end.

I might be wrong, though! This is purely my own opinion based on the above experience and my time watching community sentiment around fake reviews over the years. Have you had a different experience with this tool? Perhaps you’ve submitted a report and had it dealt with much more quickly than usual? Let us know in the comments below.